So, your voice-over is about to read your script… 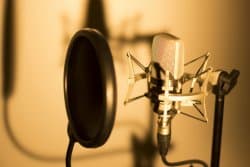 You may have been writing, crafting and editing the documentary, narrative, e-learning module, on-hold messages/IVR’s (Interactive Voice Responses), explainer or commercial for the voice-over you’ve booked for some time. You’ve probably ‘lived’ with the idea, concept, format and content for perhaps days, weeks or even months, going over and over it to ensure the text says just what you want it say, whether it’s to sell, explain, entertain or extol the virtues of a product, person, organisation or service. You probably have an idea of how you want it to sound – or how you would like/expect it to sound – given that you’ve already selected the voice-over having listened to their audio samples. And you probably think it’s all good to go, that the voice-over will supply a few different takes as per your direction and brief, with some variations in terms of tone, pace and style – and then, you’re done.

But has it occurred to you that maybe you’ve been working so long and hard on the text that you’re “too close” to what you set out to achieve? So close, that you have a very specific end-product in mind (or ear), and that maybe, just maybe, the experienced, professional voice-over artist might be able to elevate the script to a whole new level – if you simply ask for their input, or at least, opinion?

That’s what they do…

Many voice-overs simply do as they’re asked by the studio and/or client when it comes to voicing a script, once they’ve been given direction and a brief, whether they’re self-recording, hooking up via broadband using a VOIP, or they’re “live” in a fully fledged professional recording studio. That’s [mostly] their job! And it’s exceedingly rare that a client will ask for a voice-over’s input, which is fair enough for basic commercial reads, telephone on-hold messages and the like. However, when it comes to narration or documentary voice-overs, whether they’re for TV, radio, film or online, voice-overs generally like to be a part of the creative process and not necessarily just voice the script as per the producer/director’s instruction, especially if a great soundtrack and evocative footage are part of the project. Quite often, a voice-over enjoys being asked for their input, both vocally and, occasionally, with respect to content, grammar and structure.

How does this work then?

You just ask! Some voice-overs will offer their input freely, especially if they’re about to narrate an involved documentary which might be anything from ten minutes to over an hour in length. Particularly if it’s a broadcast documentary (TV, online, a client’s website etc.), has dramatic or amazing footage and a stunning soundtrack. In fact, many voice-overs deliver a very different read if allowed to be inspired by and contribute to a script which has been well written and thought out, even if the subject matter is not overly stimulating or is aimed at a niche market. In most instances, however, it’s up to the studio or client directing the session to encourage the voice-over to be involved (if they want them to be, of course). By considering this, you can achieve the best possible product – and the voice artist has done far more than just ‘read a script’.

Which is what voice-overs are asked to do, more often than not…

Greg Marston is a professional voice-over artist with more than 30 years extensive experience in voicing, script writing, recording, editing and proofing. His forte is narrating documentaries, especially when invited to contribute (and there’s a fantastic backing track or incidental music and amazing footage!). His diverse range, styles and tones, especially with respect to documentaries and narratives, can be heard via his website – www.gregmarston.net – and he is available for long or short form radio and TV commercials, e-learning modules, explainers, announcements, promos, liners, idents, presentations, telephone on-hold messaging and IVR’s, ‘voice-of-god’, movie-trailer and any number of assorted v/o styles.