Shall I grow my hair long?… 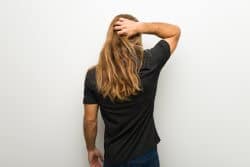 Wonderful to hear that Light and Soil are being celebrated over the next 12 months.

Launching the blog (and the website) on 1/1/15 may also have appeared a contrived effort on my part to do that which many of us endeavour to do come the first of the 365/366 days of a fresh year – make and keep various resolutions.

I therefore thought I’d start with something really basic which, for most men of my age, is an either banal or critical issue – “shall I grow my hair long?”.

As a saying goes in the industry in which I work, I have a great face for radio – that is to say it’s unlikely I’ll ever appear on camera (although in the past, a number of deluded producers, directors and camera-persons have stuck me in front of the lens on a few occasions to present the odd TV commercial – way, way back in another decade – which was interesting to say the least).

Nope, I make my entire living from standing or sitting in front of a microphone and MAC, uttering such immortal expletives such as:

Buy one, get one free!

Written and authorised by…

Do not miss out!

Happily, I voice some interesting stuff too.

Such as when, in 2014, I was based in the UAE and became one of “the” voices in the Middle East region (and beyond) for such clients as Coca-Cola, MacDonald’s, Kellogg’s, Porsche, Sony, Emirates Airline, Nestle, Samsung, FOX and Toyota to name a few.

Thankfully, the voice-work I performed for those clients amounted to something a little more creative than “Yes, that’s right, hurry in now because if you don’t, you will regret it forever and your life will surely not be worth living anymore”.

So, where does the growing my hair long business come into it?

Owing to family/personal reasons, I’ve returned to one of two places on the planet I call “home” – Perth, Western Australia (the other being Bristol, UK).

And now, because I may have to appear up-close-and-personal before various people in the “advertising/media industry”, it may be that I have to have or at least cultivate something approaching (insert three dramatic chords here), an image.

Do I therefore present myself as some older-urbanite hipster, dressing oh-so formal-yet-casual, with or without glasses, some kind of designer facial bush, skinny-fit pants, completely wild hair or, conversely, hair which appears to be wild but which is actually coiffured and heavily stylised with a 44 gallon drum of product, every time someone sees me, making sure I’m dressed in completely different attire?

Or, should I appear as a groovy bohemian type, who probably looks like he comes from the 70’s or early 80’s era, yet carries it so well that everyone thinks it’s cool-as (this mode in particular is where the potentially longer hair comes in)?

Perhaps it’d be better if I just continue to be a blend of the person I’ve been for the past year or more, presenting myself to sound engineers, advertising agency types, clients and random people I meet in coffee shops, dressed somewhat ad-hoc and, mostly, t-shirted and be-jeaned?

Answers on a post-card – if you can remember what that is.

In Episode 2 – “Wassit like being a voice-over for a living?”…